The Mystery Trout of Phelps Lake

The Mystery Trout of Phelps Lake first appeared on anglers’ lines in 1995. While its true identity has eluded us, all four fish caught to date have been about the same size and have looked similar in their shape and skin patterns. As they have been caught at different parts of the lake and years apart, it begs to differ that these are not the same fish, but multiple fish of a different nature.

Many theories have been posed by leading experts around the continent as to the species and origin of this oddity; some have suggested that it may be an Arctic Char / Lake Trout hybrid or a Brown Trout / Brook Trout hybrid (commonly called a Tiger Trout). But Arctic Char are not native to Saskatchewan, and the Tiger Trout is strictly a hatchery fish that does not occur naturally. And there has never been stocking programs of Tiger Trout anywhere near the Phelps lake area of Northern Saskatchewan. What is known though by the fishes shape and features is that they originate from within the Salmonid family of fish.

Salmonids (trout, salmon and whitefish) are genetically a “plastic” fish, meaning that they can exhibit a wide variation of different color patterns, shapes, feeding and habitat preferences within a species. The Lake Trout exhibit this genetic “plasticity,” with widely differing colors and shapes, as seen in Phelps Lake. They are noted for being among the most “plastic” of the chars, with several strains having distinct markings identified from the Great Lakes and elsewhere. An example of this is the Siscowet from Lake Superior, or the Aurora trout from southern Ontario.

Although these are considered to be subspecies of Trout, there are many other different genetic mutants (color variants) that are not subspecies, but merely just the byproduct of reproduction. This species exhibit these color variants with some frequency although, on a whole, these variants are generally rare. These mutants occur naturally and are not the byproduct of pollution or the like.

The posed theory of Lake Trout / Arctic Char hybrids is doubtful in this case because no one has collected or angled Arctic Char from Saskatchewan waters, let alone Phelps Lake. The range of Arctic Char as seen in Fig 1 is still quite far North of Phelps Lake.

This is also a very rare phenomenon between these two species due to their general and reproductive biology. However… a researcher with the Fisheries Board of Canada has recently been doing research into these naturally occurring hybrids within the North West Territories and Nanuvut. He has captured some of these oddities from the northern waters of Canada and says:

“Your mystery fish looks very much like lake trout that I saw across the Arctic, which almost exclusively occurred in lakes where Arctic Char or Lake Trout x Arctic Char hybrids were found. My working hypothesis is that the hybridization event disrupts a developmental gene that controls the formation and expression of melanophores (like pigments) in the skin, thereby altering the final colour phenotype (skin characteristic). The possibilities are interesting, and your fish are probably the southernmost limit of these morphs, if this is the case”

As can be seen from the pictures below, the natural hybrid caught in the far North has similar markings to the Mystery trout of Phelps, although certain features, like the underlying skin color, remain different?

The Mystery Trout of Phelps Lake 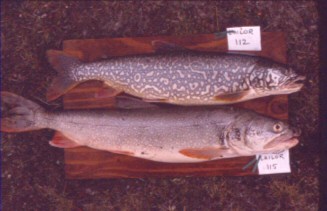 In the summer of 2004 from the request of the researcher, staff and guests from Wolf Bay Lodge collected fin samples from 50 Lake Trout from Phelps Lake. Most of the samplings were from ‘normal’ looking Lakers, but some ‘oddities’ were sampled also. The samples have been forwarded to the Ontario Forensics Center for further DNA analysis to determine if Arctic Char genes do exist in Saskatchewan waters. If there are Arctic Char genes in Phelps Lake, this would push their range far more South than previously thought.

If there are not char in the Phelps Lake waters, and these ‘morphs’ occur naturally and are reproducing and passing the genetics onto the next generation, is it evolving into a subspecies? At what point in a fish’s evolution is it considered to be a subspecies like the Siscowet or Aurora trout, as compared to just a rare genetic morph?

While these questions still remain and whatever the final findings may be, these trout are extraordinarily interesting, and are really a prize to have in Phelps Lake!